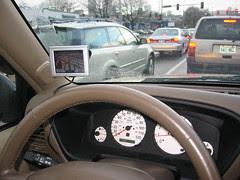 Garmin Nuvi 350 in my car
Originally uploaded by SquidgeyFlint

Add-on GPS units are another example of technology that just makes sense and provides such a valuable service that it's easy to become dependant upon it.

Earlier this week I went up to Redmond for an after work Microsoft Playtest. Since traffic can be highly variable I choose to potentially be hungry instead of late. I got there with enough time to spare to find food. Fortunately, I had my trusty GPS with me and asked it to tell me what food was nearby. It couldn't've been easier to get food and get back in far less time than had I just started driving around looking for stuff. I'd've definitely got lost. After the Playtest was over, I needed some fuel, so score another one for the GPS.

While GPS units are still pricey, these are definitely going to go the route of power windows and anti-lock brakes -- eventually coming standard on every car. The touch screens are easy to use and while the quality of the user interfaces can vary, they're all easy enough to use. The real value here (besides the core functionality) is the built-in database of businesses. That are many other pluses but being able to do things like hit the button for 'GAS' and have it show you all the gas stations near by, closest ones first, is an awesome use of personal technology.

Email ThisBlogThis!Share to TwitterShare to FacebookShare to Pinterest
Labels: technology

SquidgeyFlint
I'm a software guy will into my career (ie. an old dude). I manage a few teams of software developers at your favorite internet retailer. I really like photography. I also have a healthy love of bacon, chocolate, and all the smokey goodness that comes out of my smoker (assuming I do it right ;->)

See all of SquidgeyFlint's photos